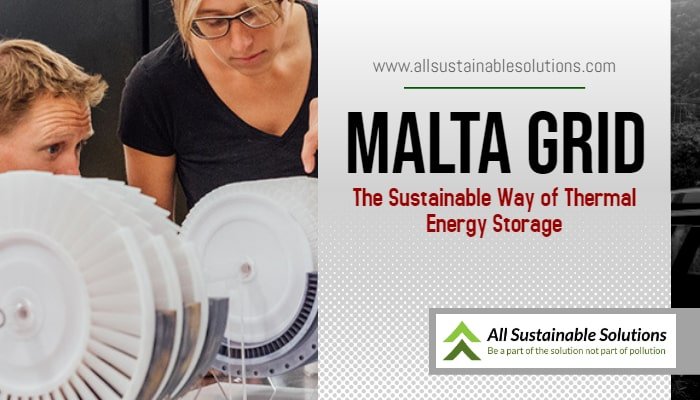 Electricity is required for all our needs, and there is the scarcity of power. To match the deficiency, energy storage is an option. There is a vast difference between the need and availability of electricity. Therefore, there is a constant search for ways which can help in fulfilling the needs of ever-growing electricity demand. Energy derived from any source like the wind, solar, or fossil fuels can be stored. However, the cost of storing electricity plays a vital role in deciding how will it be stored. Malta presents the all-new electro-thermal energy storage system. It is a new grid-scale technology that collects and stores energy for long durations. It has the added advantage that energy derived from any source at any location can be stored, making the operation of the malta grid to be very reliable and predictable.

Need for opting for sustainability:

These days there is a need to opt for sustainable energy storage. Wind and solar energy are inexpensive, abundant, and clean but then they are not reliable. It is so because the wind doesn’t always blow, and the Sun doesn’t always shine. The natural resources fluctuate and are unpredictable. Therefore the humungous capital investment made to capitalize on them remains to sit idle or are forced to be used in a way that causes damage to them and shortens their life.

Going as per statistics as high as 40% of energy goes wasted globally because they cannot be used at the time they are generated. Almost 43% of wind energy is curtailed in most of the world. There is a need for at least 100 GW of energy storage to be installed all over the world.

Storing energy on the Grid at low cost for long periods of time:

Energy as and when produced by solar panels, wind turbines, and fossil plants are stored by a key pain point for grid operators to be used later. Malta has brought a breakthrough solution whereby it mitigates wind and solar curtailment. It works effectively to match the generation and demand of energy and doing away with the bottleneck that erupts in the distribution and transmission systems.

Reach out for a better way to cleaner reliable electricity on the grid:

Malta has developed a system that is made of conventional components and ample of raw materials like steel, air, salt, and commodity liquids. The technology is based on using the already present manufacturing and construction ecosystems in the power, oil, and gas industries. This has a dual benefits in terms of reducing the costs and risks. The technology has been evolved after a lot of research to be implemented, and it is not a hit and trial project to be tested.

How does the Malta Grid system work?

Complete process can be explained in the following points-

Features of the Malta system:

Pros and cons of the Malta System:

Alphabet’s Malta’s system, energy is stored as thermal energy, in the form of hot and cold. Nobel Prize-winning Stanford physics professor Robert Laughlin developed the system. He designed a theoretical system that stores electricity for days or even weeks until required. In his theory, it is explained about the system and the math behind it. He showed how all the components should work together.

X decided to take the theory and build all individual components and understand the overall system’s worth in the present world, at a competitive price. It took two years to build CAD drawings, running extensive computer stimulation’s, and 3D printing lots of parts. After this step, the real machinery was built, with exact angle of each blade in a turbine and the strength and thickness of the material used. It was then that team X realized that the system has essential features that make it suitable for being used in the environment.

Pros and cons of Malta’s Grid storage are as follows:

This Malta is striving hard to check and test its commercial feasibility. They are trying to expand and make this cutting edge technology a part of our daily lives. Malta has been successful in getting the required funding for making the project commercially feasible. Breakthrough Energy Ventures initiated the funding of Malta along with its investors that include Concord New Energy Group and Alfa Laval. They started Project Malta at Alphabet’s Moonshoot Factory, X, and it is now an independent company outside Alphabet. In short, the team was originally “Project Malta” at Alphabet’s X. it was a group of investors and entrepreneurs who build and launch technologies.

CEO of Malta Ramya Swaminathan commented that the investors and they share a common vision and mission to create scalable storage solution. That will prove to be a turning point in the expansion of the renewable energy and improves grid stability across the globe. They have come together not only to provide capital. For becoming a part of the new journey that will change the scenario of electricity availability.

After the collaboration, Malta will work with industry partners to design and develop industrial grade machinery for being used in the first pilot system.

Carbon free energy for the Future

Energy storage through Malta will prove to be a solution for an electrical grid that is renewable, intermittent generation. Efforts are being made to make collaboration with investors and companies to develop the cutting edge technology. In future issues related to the availability of clean and reliable energy are bound to increase. With the natural renewable sources of energy comes the fear of them being unreliable.

The addition of thousands of megawatts of solar energy has made the storage costs and wastage of energy to increase. With Malta grid this tasks become both cheaper and risk-free, along with being carbon-free. A lot of efforts and consistent creativity has led towards the fulfillment of widespread energy storage a reality.

Malta grid has developed an energy storage system that will make energy storage services to be very flexible all across the globe. The concept is based on the principles of thermodynamics for a system that stores energy as heat and cold and at a very low cost it can be expanded. To be a part of future revolution in the field of energy storage contact [email protected]. Regarding all capital and working investments drop a mail at
Malta Inc.
210 Broadway, Suite 201
Cambridge, MA 02139