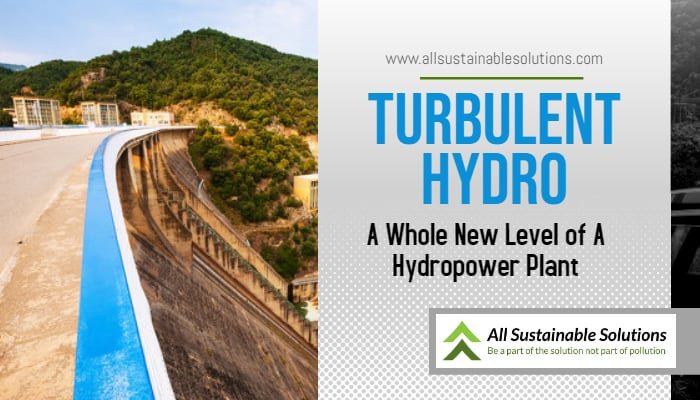 Hydropower has been long considered as a sustainable energy generator. But since it has a few major drawbacks, the technology has not been used much. Turbulent Hydro came to the rescue by eliminating the weakness of the hydropower. The innovation makes the idea of hydropower is no longer resistible.

What is Turbulent Hydro?

Turbulent hydro is a technology to generate power from the stream of a river. Adapted from the basic principle of a whirlpool, this vortex turbine can work individually or as a group of multiple turbines. Overall, this system has much better efficiency than conventional hydro turbines.

Turbulent Hydro Installed at the Drop of A River

The innovation will not harm aquatic life as traditional turbines. It can also work even in shallow rivers. Turbulent hydro can supply power for as low as a few households to a large community.

How Does It Work

The main principle of Turbulent Hydro is not far different than the conventional water turbine. The machine is placed in the middle of the stream. Gravitational force will make the water flow to the machine so we can utilize it to produce electricity.

A large trash rack will filter out large debris to avoid it coming inside the machine. Small debris and fishes can still pass through as it won’t block the machine. Turbulent Hydro also has an automatic sluice gate to control the incoming flow.

As the water comes inside the basin, it will cause the rotor to spin. The tilting blades in the rotor are manually adjustable to maximize performance in every season. Following the rotor spinning, the generator will produce energy as both components are directly connected.

What makes Turbulent Hydro special is that the machine uses low-pressure technology, which is effective to avoid harming any of the living creatures that go inside the turbine along with the stream. It also uses a vortex turbine for more efficiency in the process.

More About the Machine

It doesn’t take a big river to get a supply of clean energy for your community. The smallest installation can produce up to 5KW of electricity per day. You can install several hydropower machines in one river for more electricity production.

The material used to make Turbulent Hydro can vary, depending on the actual condition on site. The basin can either be made of metal or brick and mortar. The impeller hub can either be cast iron, stainless steel, or pure steel. The turbulent team will survey the location first before deciding which materials are best to use for the project.

The total weight of this set is around 900 kg to 1,850 kg. The turbine diameter ranges around 1.5 to 5 meters, while the basin itself can span around 3.8 to 7 meters of diameter. This installation can work 220 to 480 volts and 50/60 Hz of electricity specification.

Turbulent Hydro can work as a stand-alone energy source to power a small facility as well as to connect with a large grid system for more well-managed electricity generation. For the higher needs of energy supply, you can install multiple vortex turbines in one area.

Turbulent Hydro has received thousands of requests for the installation of its innovative hydropower system. Due to the flexibility of the technology, the team can customize each design for each project. The minimum requirement for a site to get this turbine installed are:

Anyone interested to invest in this innovation can send their request for a quote here. However, make sure to include some crucial information, such as:

The return of investment for installing Turbulent Hydro is estimated at around four to eight years. It can go as quickly as just two years if the vortex system is replacing a diesel-based generator.

Turbulent Hydro comes as a highly beneficial technology of sustainable energy generators, as it offers way better advantages than conventional water turbines or any other eco-friendly energy source.

Unlike the conventional river turbine, a vortex turbine does not interrupt aquatic life. Fishes and the likes can pass through without getting harmed in any way.

Each installation of Turbulent Hydro is specially engineered to match with the site condition. Not to mention the durable materials and machine components. The whole project results in a high-quality installation that can last for about 15 years.

Compared to windmills and solar panels, hydropower does not take up much space on land. Furthermore, Turbulent Hydro is more compact than conventional water turbines, meaning that the footprint is even lower.

You can get your hydropower installed as you need it to be. It is possible to install the hydropower for as low as 5KW to as high as 200KW. It can even work in a grid or as a singular machine off the grid.

Many people are hesitant to install eco-friendly energy generators as most of them are expensive both to install and operate. But, Turbulent Hydro estimates that the investment will return in 2-8 years. Some previous projects have made their return in 4 years.

Turbulent Hydro does not require a dam to operate. With no dam, there will be no risk of flooding caused by hydropower. The river will act naturally as if the turbine was not there.

With no fossil fuel to burn, Turbulent Hydro can reduce the carbon emission. For one installation of 5.5KW, you can cut up to 17 tons of carbon per year.

Turbulent Hydro is not an experimental product. There have been a few installations running in several places worldwide, and even more, projects going on. Here are some of their currently-operating hydropower:

This ongoing project is probably the largest installation of Turbulent Hydro as its capacity reaches up to 600 KW. However, only a machine of 100KW has been installed. The remaining 500KW is in progress.

Located on the Anong River, the turbine system is expected to finish in 2020. Estimated, SJS Development would be able to gain their return for this investment in four years. It also will reduce their carbon dioxide emission up to 744 tons per year.

A singular vortex turbine in the middle of Ayung River can produce electricity up to 13 KW per day to power an eco-friendly school with more than 700 students, teachers, and staff.

With a custom design, Turbulent Hydro can operate with minimal squeaking and vibration, making it impressively quiet. The finished project brings a return for the investment in four years.

With a river depth of only 1.7 m, the hydropower can successfully generate up to 15KW per day to power an agricultural farm. The turbine was finished installed in January 2018 and started its operation in March 2018 the same year. This is the first actual project of Turbulent, after its pilot experimental project in Cleerbeek, Belgium.

Established in 2012, Turbulent mission is to deliver clean energy in remote areas with low cost by developing innovative technologies and empower local culture as support. The Belgian company has received many awards and prizes for its remarkable innovation in sustainable energy.

The founders are Jasper Verreydt and Geert Slachmuyders from Belgium. With a compelling background in Finance and Legal, Verreydt runs the company as the CEO. Meanwhile, Slachmuyders leads as Chief Innovator as he has impressive skills and knowledge in Electromechanic and Intelligent Mobility.

You can also check out their social media to keep up with the latest information regarding their hydropower business.

Turbulent Hydro has made the hydropower technology irresistible. With so many successful projects across countries to prove its benefits, the company has received thousands of requests for this turbine system. This innovation seems to be changing the future of energy generation.