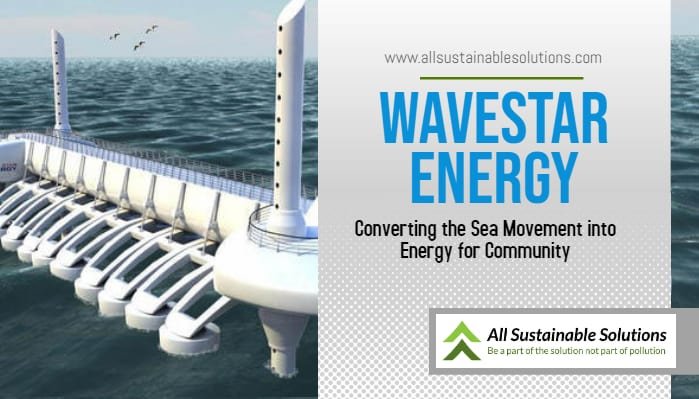 Most people are looking up to wind and solar as sources for sustainable energy. Little did they know that far off the coastline, the sea holds a more powerful potential on its waves. This is what the innovation from Wavestar Energy is based on. With advanced mechanisms, the company can provide a fresh concept of an eco-friendly energy generator. Let’s hear more about this new invention.

Wavestar Energy is a technology to generate sustainable energy by converting the kinetic energy of the ocean waves into electricity to power large communities. The innovation is said to be a future brilliance as it has more advantages than most energy-generation technologies, even the sustainable ones like a windmill and solar cell.

Wavestar Energy is continuously under development to perfect both its efficiency and effectiveness. The current machine has a capacity of 500 kW. But the company aims to make it even bigger so that it could generate electricity up to 6 MW. That amount of electricity would suffice the needs of power for 4,000 households.

Wavestar Energy is a long installation with arms connected to half-submerged buoys. The machine itself stands with some feet constructed inside the seafloor.

The 70 meters long of Wavestar installation

Those buoys will go up and down as the waves pass by. The hydraulic system will utilize this movement to rotate the generator, resulting in electrical power. As the buoys will raise in turn, this system can conduct a continuous process of energy generation.

The waves are moving the buoys up and down

It is proven that Wavestar Energy can still run even with strong wind and waves going on. When the storm gets too wild, the arms will move the buoys right up. This demonstration is what the company refers to as “storm protection technology”.

The concept was invented in 2000 by two sailing enthusiasts, Niels and Keld Hansen. When they were currently on a sail, they came up with the idea of how to take advantage of the strong power under their yacht. They began to work out their idea. In 2003, the two brothers secured the rights of the machine.

In 2004, the two brothers made their prototype on a scale of 1:40 in Aalborg University, Denmark. This project is to simulate their concept and learn basic techniques. After more than 13,000 times of testing, the machine was ready to run on an actual sea.

In 2005, Wavestar Energy started designing a new machine on a scale of 1:10 to connect with a grid system. It made its first debut for an actual project on a sea at the Nissum Bredning. By the mid of July 2006, the installation can fully operate round the clock to generate about 110 kW of electricity. After about two years of running, the system has gone through a storm for fifteen times without getting damaged.

In September 2009, the company scaled up the size of their machine to 1:2 for a project in Hanstholm. Later in February 2010, this installation made its connection to a grid system and delivered a reliable supply of electricity up to 600 kW.

According to their reports, the amount of output energy was simultaneously increasing that they can start monetizing. Even so, the graphic was still up and down. The statistic also showed detailed information about waves and wind situations on a day-to-day basis.

Their next project is to raise the size again from a 70 to 140 meters long system. The machine will sit further off the shore to get to deeper water. According to their calculation, doubling up the scale like this may result in eleven times more energy than the previous machine. That means the power output of this system can reach up to 6MW. According to its official website, the development of this project is currently ongoing.

The Advantages of Wavestar Energy

Wavestar Energy is a new solution for sustainable energy sources. Unlike other conventional technologies, this innovation brings more benefits to consider such as:

Wavestar Energy can be installed in any shore area all across the globe. It doesn’t even need a huge wave to make the system work. The minimum wave height is 0.06 meters high on average, calculated every 10 minutes of interval.

Earth has twice more water than land. And if we utilize the waves more than we do, we would be able to supply more power than we need. Installation of 140 meters long can supply up 6MW of electricity. Imagine how much we can get more.

Waves keep moving all the time without a pause, unlike the winds and solar light that are not available 24/7. It makes the ocean a more dependable source than wind or solar. There might be a little issue during a storm, but Wavestar Energy tends to be less prone to storms than any other wave energy technologies.

As most of the structure will be off the shore, we can cut off the land footprints. Of course, there would be some structures on land, especially on the beach where the installation is based on. However, its footprint would still be significantly lower than the footprints of land-based energy generators.

Most machines require a double size to deliver twice more output. But in this technology, a little bit of size up can significantly increase the production. According to the last development, doubling up the size of Wavestar Energy will make the machine generate eleven times the amount of electrical power.

Most wave energy generation machines are noisy, but the Wavestar machine is impressively quiet. Hence, it will not cause noise pollution issues in the surrounding area, either for the communities nearby the beach or even the marine life beneath the structure.

For more efficient use of space, Wavestar proposes the idea of combining the machine with windmills. Multiple units of Wavestar machines and windmills can get arranged alternatingly. This setup will make an advanced energy park where two concepts can complete each other.

The excess energy output can be commercialized to gain profit. With a little bit of size-up, the machine will produce significantly more output to monetize. Not to mention that you don’t have to invest much for space because it would be far off the land. This might be a big investment worth considering.

The Disadvantages of Wavestar Energy

Beneath all the good things it brings, Wavestar Energy also has several disadvantages. However, the company sees them as challenges rather than drawbacks. They keep developing their innovation in the hope to settle every issue, such as:

Cost is a classic challenge for almost every new technology. The same goes for Wavestar Energy. However, the company keeps on developing the machine to find a way to increase its cost-efficiency.

The structure will disturb the seafloor, and most likely, the corals. Hence, the ecosystem around would also get affected. Not to mention that there would be some area that wouldn’t get sunlight anymore as the machine blocks the way.

However, the effects on marine life from Wavestar is still comparably low amongst other offshore structures. The machine is quiet. It also possesses no risk of dangerous chemical leakage.

Because it has to be located off the shore, it would be difficult for the power output to reach the communities that are far from the beach. Landlocked countries and towns would find it difficult to use this technology to satisfy their power demands.

Although sizing up the machine can increase its efficiency significantly, sizing down would make the investment too expensive. Hence, this technology may be not suitable for small communities. You have to go big for it to make it worth.

Wavestar Energy is a Denmark-based company with a passion for clean energy productions. Although the Hansen brothers are the brains behind the invention, the company’s main shareholders are the Clausen brother. However, the Hansens are still the consultants at the company.

To reach their dream about an unlimited supply of clean energy, Wavestar Energy has a genius idea to construct the wave-based energy generators between floating windmills. Such an ocean-based energy park would be effective and efficient at the same time. It might even change how the world runs sustainable energy productions

If you are interested to get in touch with Wavestar Energy, here are some ways to reach them:

The sea has a huge potential of energy, yet still, there have been so little people taking advantage of it. But thanks to Wavestar Energy, we can look forward to more sustainable energy generators from somewhere off the land. And since the company keeps on developing their innovation, the world might be able to see a much better version of Wavestar Energy shortly.