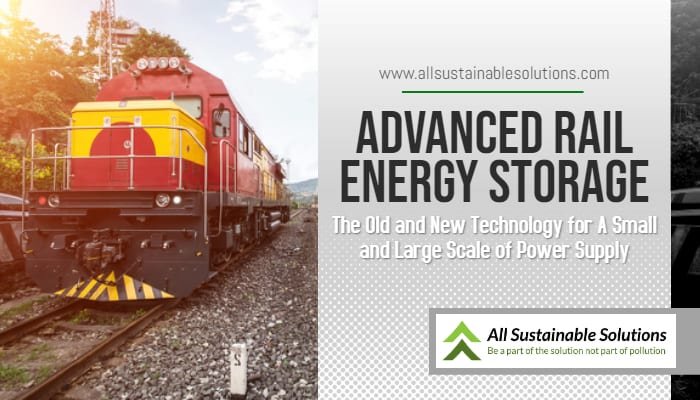 Advanced Rail Energy Storage: The electrical grid sounds like an effective solution for cleaner energy supply to replace the old fossil fuel system that is dirty and toxic. However, this sustainable energy system also possesses a typical problem of supply instability. That is why energy storage comes as an essential part. The device will work as a large-scale battery to save excess energy to use later during deficit supply.

Many engineers and tech companies are struggling to come up with an effective system for energy storage. One innovation that may work is ARES, which stands for Advanced Rail Energy Storage. This innovation was invented and developed by a company with the same name, ARES LLC.

ARES is a large-scale energy storage device that uses a gravitational train system. This innovation consists of several sets of train on the funicular railroad. This system sits on a hill slope so it can utilize gravitational force to discharge the potential energy. Its cars are solid concrete weighing up to 300 tons each that moves with a maximum speed of 16 miles per hour.

ARES can manage around 100 to 3,000 MW of electrical power. The system can store energy for 2-24 hours with an efficiency of up to 86%. This mechanism also offers a fast response with only 5 seconds charging and 25 seconds discharging. It takes only 34 seconds from full charge to full discharge. With proper treatment and maintenance, the system estimated should be able to last up to 40 years.

This is not an entirely new technology as there has been plenty of energy storage system that keeps the energy in the form of potential energy and takes the advantages of gravitational force. Even a train system is an older form of technology. However, ARES came impressively as it combined the old and new technology.

William Peitzke was a retired businessman focusing on sustainable energy technology. He was the one who came up with an idea to construct a hydro-electric pump energy storage. The retired energy business expert then went to see John Robinson discuss the matter. John Robinson was a scientist who worked for NASA during the moon landing project.

However, Robinson disagreed with the hydro-pump system as it relies too much on water supply. Hence, they turned to Matt Brown, a ship and plane engineer. And then, the idea of a train appeared as a solution.

In 2010, Peitzke founded the company of Ares North America, LLC. The company name uses the same name as the innovative device they are working on. The company headquarters is in Santa Barbara, California.

Ares North America LLC is a private company with huge concern about sustainable energy. The team is currently focusing only on developing their advanced rail energy storage. After completing the Nevada project, the company aims to install more of this setup on another location.

How Does the Advanced Rail Energy Storage System Work

ARES system works with at least two storage yards with opposing locations. One storage yard lies at the highest elevation while the other one lies at the lowest ground. When the power plants generate excess energy, the electric locomotive will use some of it to move the concrete cars via the cable track up the hill from the lower station to the higher one.

The cars will put down the concrete at the upper storage yard. And then, the empty train will go back down to take more concrete. This practice will turn the overloading energy supply into potential energy and keep it there.

When supply is low, ARES will work in reverse to suffice the high demand. The train will bring concrete cars from the upper yard to the lower one by utilizing the force of gravity. The motor inside the train will work as a generator. Hence, the movement will discharge the energy back to the grid can transfer it right away to the distribution grid.

ARES also provides ancillary services to maintain stability on the electrical grid as a response to the power fluctuation. The services include voltage stabilization and momentary supply-demand balance. Moreover, this system can restart the generators in a disastrous emergency.

ARES LLC launched its prototype of ARES machinery in Tehachapi, California. However, the first commercial operation is still on its process to launch. The plan is to establish Energy Storage to integrate with wind and solar power plants on an electrical grid. The project will take place around three miles south of Pahrump, Nevada, United States.

The planning of ARES Nevada started in 2012. And in 2016, the company has just gained a legal permit from the US Bureau of Land Management to construct the system. It predictably will take eight months with $55 million of cost. If things go as planned, this concrete train energy storage will start operating in 2020.

ARES Nevada has a capacity of 50 MW. It would be able to produce 12.5 MWh of energy. The setup only has one single rail track of 9.2 km in a slope with an elevation difference of 2,000 feet. There are six units of trains weighing about 300 tons each. The railway network will take only the area of 70 hectares.

Many people, including experts, are rooting for ARES. The innovation sounds highly promising as it offers a solution with plenty of advantages, such as:

It uses no chemical components like batteries, so there will be no toxic pollution to damage the environment. The train does not use coal or fossil fuel either as it runs with sustainable energy from the electrical grid.

Unlike the hydro-pump system, ARES requires no water or dam. This rail track system does not require any environmentally-sensitive materials either. Hence, constructing it will not cause any harm to the environment.

Environmental Assessment and Biological Opinion had reviewed ARES. The institution concluded that technology possesses no significant impact on the ecosystem. Such a rare benefit considering most technologies may affect wildlife.

Unlike most energy storage, ARES is flexible when it comes to scalability. It can work from 10MW to 2-3GW. Although the larger capacity will result in the lower average cost. However, this benefit is useful, considering most energy storage only works for large-scale.

ARES works with more than 80% efficiency. Even this rate is relatively constant, making it reliable to balance the instability of sustainable power supply.

The capital cost of ARES Nevada might be relatively high at the moment. However, the rate might be more cost-efficient on a larger scale, about 60% lower than the hydro-pump system. Furthermore, the Levelized cost also turns out to be cheaper than any other means of technology.

ARES does not need an actual hill to sit on. Even a slope might work as long as it has the elevation differential of no less than 800′ and 20-50% of grades.

ARES can charge and discharge with a round-trip efficiency of more than 80%. It takes only seven seconds to go from full charge to full discharge.

ARES is free from sound pollution as the machine works quietly. Hence, it would be safe to construct near the residential area or a forest as there would not be any disturbing noise.

Although ARES gained much positive feedback for its tremendous advantages, the innovation also receives one same critic from many experts. It is the initial cost that happens to be a drawback.

As we have learned before, the ARES Nevada Project costs $55 million to manage the power supply of 50 MW. That number is relatively higher than any similar technology. The company even struggled to raise funds for the ARES Nevada project.

The company stated that their innovation would be more cost-efficient if they increase the capability. By doubling the scale, ARES would cost only 20% more. If this claim is true, then this innovation would be more cost-efficient than the pumped hydro energy storage, which is currently the most popular energy storage technology. Levelized cost of ARES can go down up to 60% of the cost of the pumped hydro system.

Another disadvantage that ARES brings is that the system requires to cover a large area of land. Take ARES Nevada as an example. The 12.5 MWh system covers about 70 hectares of land. Fortunately, the ARES operation is not noisy. Nor it produces harmful waste. Hence, the project site does not have to be too secluded.

Gravity-based energy storage might not be a new concept. However, ARES came out with unique technology that carries along with ancillary services. This innovation has delivered a promising solution to resolve the instability issues in an electrical grid system. With some more development and support, ARES would be able to provide a great contribution to creating a more sustainable environment.