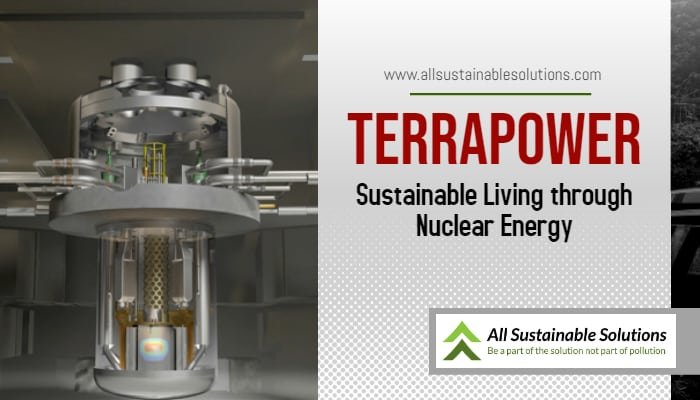 As per records, it is expected that by 2040 the requirements of electricity will reach 9 billion. To meet the increased needs the, increase in the production of electricity will be at 28%. The difference will, however, create a massive difference between the demand and supply of electricity. To avoid all these situations of disparity it, is important that sustainable sources of energy and electricity storages are developed. TerraPower is taking the complete initiative to produce more sustainable, scalable, safe, cost-efficient needs to be undertaken and this. One such mode is using nuclear power for higher thermal efficiency using uranium and resources in the most efficient, clean and safe way.

TerraPower is a renowned name as a developer of ideas that provide energy independence, environmental sustainability, medical advancement, and cutting edge opportunities. The company works to solve some of the significant challenges that are being faced presently in the world. TerraPower strives to combine the strengths and expertise of the world’s public and private nuclear research and energy sectors.

History of the Nuclear Reactor

A mathematical analysis of waves of fission moving is further through fossil fuels. After many years of research and development, it is concluded that nuclear energy is the way, to brighter and sufficient living. To the present day, it is striving to achieve the startup of its prototype TWR reactor in the mid-2020s for global commercial deployment. It has started to conduct ongoing experiments to check innovative materials and fuel designs. It has started to build relationships with many private companies and national labs for to test innovative material and fuel designs.

Bill Gates and a few other visionaries founded TerraPower. They had a shared vision of developing nuclear power for the needs of society. The company is headquartered in Bellevue, Washington, United States.  Transformative innovation in atomic science and technology to bring a positive change in society was its motto. The company onboard has some of the most diligent and dynamic experts who work to bring new methods in practice to solve the problems of humanity. This very motto drives the company since its inception. TerraPower is continuously trying to expand its horizon to enhance the power of science and technology for making the world a better place. All the members of the TerraPower had a mission and vision of developing the nuclear reactor designs for solving the issues of the world. The company is developing a class of nuclear fast reactors called the travelling wave reactor (TWR).

How does TWR work?

The traditional nuclear reactors and TerraPower nuclear reactors work very differently. It uses fuel made from depleted uranium, which is the byproduct of uranium enrichment process. Nuclear reactor was designed to change the fuel  without removing it from the reactor’s core. This eliminates the need for reprocessing, generating heat and producing electricity for a significant period with continuous operation. There is no need for reprocessing proliferation concern, and thus, the complete cost of nuclear energy is reduced.

The TWR concept places a small core of enriched fuel at the epitome point of a bigger mass of non-fissile material and the material used here is depleted uranium. In this the neutrons from fission of the core “breeds” new fissile material in the surrounding mass, producing Pu239. With time there is ample fuel in the area surrounding the core that it starts to fission, thereby sending neutrons further in the mass and remaining on the process as the original core burns out. Over the decades reaction moves from core of the reactor to outer part and thus getting its name of “travelling wave”.

The travelling wave reactor with its in situ breeding can greatly reduce the need for enrichment or reprocessing. With breeding as its main focal point, the reload for fuel brings from critical fuel. The whole purpose then facilitates breed-burn to propagate. The complete science is based on the fact that breed-burn waves and the fuel move relative to one another. The fuel or the waves are thus relative to the stationary observer.

Light water reactor (LWR) fuel is also at times used as TWR reload fuel. In both the usage case, there is very efficient fuel usage and a massive reduction in waste volumes as there was no requirement for reprocessing. The best part is for reloading fuel depleted uranium is used and thereby no enrichment facilities are required for sustaining the first reactor and few chains of successor reactors. With conceptual and engineering design, the TWR technology proves to be beneficial economically in the long run.

All about the travelling wave reactor and plant parameters:

TWR core works to generate fission energy and this is then transferred in a series through primary and intermediate loops to the steam generators and then superheated steam is produced. This steam so generated is used to power a steam turbine-generator set to produce electricity. In the process, low-temperature heat is also produced but is rejected through a set of water-cooled vacuum condensers.

The intermediate loop functions to act as a fence between primary coolant loop and the high-pressure steam cycle. This serves the purpose of maintaining the strong integrity of the core and primary sodium boundary even if there is any leak or breaks by default.

TWR comprises of a pool-type configuration where the primary system components (core, intermediate heat exchangers, and pumps) all of these are placed in a large zone of atmospheric pressure sodium in the reactor vessel. There is a guard of the independent vessels around the high-atmospheric pressure sodium to maintain the sodium levels even if there is any leakage in the vessel.

The same system has been adopted in various reactors including Experimental Breeder Reactor- II (EBR-II) in the United States, Phénix and Super Phénix in France, BN-600, and BN-800 in Russia and China Experimental Fast Reactor (CEFR) in China and Prototype Fast Breeder Reactor (PFBR) in India. With a pool type configuration, there is an advantage of reducing the amount of piping and space needed to provide large thermal inertia and significantly elimination the issues and consequences that could have arose due to coolant leak.

Commercial TWRs have net power ratings ranging from 600MW to 1200MW electric. With this range of power levels there is primary evolution from the first 600 MW electric prototype plant to larger units that comprehend the first 600MW electric prototype plant to achieve improved economies of scale. Inlet and outlet core temperatures are ranging from 360 degrees C and 510 degrees C respectively. The temperatures correspond to a plant net efficiency of about 41% a significant improvement over the 33% wave efficiencies typical of current commercial LWRs.

The TWR plant is designed with construction, maintenance, and operation to minimize costs and maximize availability. Highly advanced technology is used with the help of a team of experts, architects-engineers, designers, and operators from the past SFRs who combine the best practices from the industry dated back 1100 human years.

The complete SFRs are made of hexagonal assemblies of wire wrapped cylindrical fuel pins, which are engulfed by an outer steel duct. There are control rods to control and are inserted in the core with a redundant bank of shutdown rods to accomplish the function of a shutdown reactor. The fuel assemblies use novel duct geometry and advanced steel-features to improve reactivity and reduce the amount of duct material required. thus it has low-leakage and large rows of peripheral for new load fuel breeding.

Why was TWR chosen?

TerraPower had selected TWR as its central and primary technology for this reactor works positively and efficiently in high fuel utilization in a way that does not require nuclear processing and it would over the period not require enriching uranium.  Travelling waves primarily convert the non-fissile fertile nuclides like U-238 in fissile nuclides like Pu-239 in-situ and transfer power from the area of high burn to freshly bred region as an integrated breeder reactor.

The entire process can then give the benefit of closed fuel reactor without expense and proliferation-risk of enrichment and reprocessing plants. There is ample fuel for some 40 to 60 years of operation could be in the reactor from the beginning. The reactor if buried below ground could run for about 100 years. The main reactor design at TerraPower is described as “Generation IV, liquid sodium-cooled fast reactor”.

Using depleted uranium fuel, as the new reactor type reduces stockpiles from uranium enrichment. Going by figure, it can be noted that the US hosts 700,000metric tons of depleted uranium and eight metric tons can power 2.5 million homes for a year. A few reports suggest that high fuel efficiency of TWR with uranium (recovered from river or seawater) could generate fuel for providing electricity to 10 billion people at the US per capita consumption levels for million year time scales.

The beginning of a great mission was embarked as nuclear power was to be used as energy. The complete brainstorming session with the great visionaries revolved around sustainable, scalable, low carbon energy for all the people of Earth.

Electricity and energy are limited and are required by all. In the session, all forms of energy were discussed and considered along with their positive and negative aspects. The other technologies or sources of energy like solar and wind were essential but, then it was concluded that nuclear technology is the only mode of energy that can prove its worth. Atomic energy provides the base load power in environmentally acceptable manner for any time scale.

In the brainstorming session, it was concluded that nuclear power could realize improvements by rigorous applications. It is require that the power and capabilities of nuclear energy are used in an optimized way. The motive of the group was to use nuclear energy with safety, without wastage, optimally, economically, weapons proliferation resistance, and complete social acceptance.

In this endeavor, it was tested that nuclear waste from the TWR is 80% less by weight of heavy metal that comes in the form of LWR for each unit of the electrical energy produced. Thus it is very compatible technology with nominal wastage. Considering weapon-proliferation it was concluded that the risks were reduced, as there is a reduction for enrichment, long-term isolation of the fuel nuclear island between infrequent decadal refuelling outages and reprocessing facilities.

TerraPower has proved it worth and achieved success in the development of nuclear reactor design all due to public-private partnerships by partnering with commercial partners and creating a new supply chain for fuels and materials. At TerraPower, the teams and the members are sharing their mission and vision of using nuclear sciences to its fullest potential. It is aiming at using nuclear energy as a technology that is safer, sustainable, and cost-effective. If you would like to contact the company for any queries below are the company details