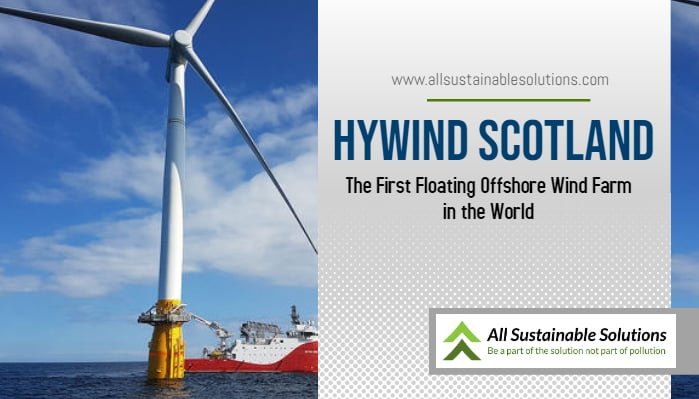 The wind turbine has been one of the most popular options for a sustainable energy generator. But Equinor and Masdar have elevated this technology to a brand new level with Hywind. It is a set of wind turbines floating in the middle of the ocean. The first operating Hywind farm is Hywind Scotland.

How is this technology possible and what is the prospect of this innovation in the future? Let’s have a thorough discussion about it.

Hywind is a wind turbine floating offshore on a cylindrical buoy, which is moored to the sea beds by chains and suction anchors. This advanced technology of sustainable energy generator was developed by the collaboration of Equinor (formerly Statoil) and Masdar.

The idea of Hywind came across a senior engineer, Dag Christensen. While he was sailing, he saw a marker buoy floating in the ocean. He wondered if only he could make it significantly taller and bigger to withstand a windmill. Later on, he worked on with his fellow senior engineer, Knut Solberg, to develop the innovative concept.

Why the Floating Offshore Wind

The problem with common land-based wind turbines is unstable wind quantity. Sometimes it blows strong. Sometimes it is just more like a breeze. While some other times, it does not even blow at all. On the other hand, people need a constant energy supply to suffice their electricity needs. Of course, we can use some energy storage to conserve power. But it can still be problematic if the energy insufficiency lasts too long.

Meanwhile, offshore wind is much stronger and more stable due to the lack of friction over water. This condition may generate a higher amount of electricity while also keeping the supply stable.

However, constructing wind turbines in the middle of the ocean is expensive and difficult. A fixed structure can only work on shallow water, which is not enough to catch all that strong wind.

How the Hywind Scotland System Works

The technology of Hywind is not entirely new. It is a combination of conventional wind turbine technology and offshore structural technology. This sophisticated system works in harmony.

The wind turbine itself works like conventional windmills. It starts when the wind blows the rotor blades and causes it to spin. This movement also spins the generator and makes it create electricity.

The tower is 253 meters high, while about 78 meters of it is submerged underwater. To keep the structure stays upright, each tower is ballasted and moored to the sea bed by three suction anchors. This mechanism allows Hywind to stand on the ocean of 95-129 meters deep.

Furthermore, Equinor plans to connect the Hywind farm to energy storage for a better energy preservatory. The Batwind, Hywind’s energy storage, is a giant lithium battery with a capacity of 1 MWh, which is equal to 2 millions of smartphone batteries.

Here is to sum it up:

The buoy of Hywind keeps the structure stays standing upright, allowing the rotor to catch the offshore wind and generate power. And then, the power will be managed and distributed to households by Batwind.

Equinor’s first official floating wind farm began its construction in October 2017. It is located on the offshore of Scotland, about 25 km away from the coastline of Peterhead. There are 5 units of wind turbines in the area of 4 kilometers square. The capacity of each turbine is 6 MW, which means the farm can generate up to 30 MW. This innovative setup has been successfully powering more than 20,000 households.

Eight years before The Hywind Scotland, Equinor has constructed its Hywind prototype project in Norway. And now, more Hywind farms are in the process.

Hywind offers many benefits and solutions that are hard to ignore. Here are some of them:

The wind comes more often on the ocean than on land. That means the turbines can generate power more often, which results in a steadier supply of energy. This condition reduces our dependant on energy storage devices.

If we move onshore wind farms offshore, we would get more unused land areas. We can utilize them better for something else, such as forest revitalization. On the other hand, the ocean surface is still widely available and we don’t even plan to utilize them much.

Hywind Scotland has been actively operating since 2017. Long before that, the prototype of this innovation has been performed on a demo project in 2009. This system has been researched and confirmed effective and reliable to be a sustainable energy generator. Equinor is currently working on more Hywind farm projects located in many countries.

The Hywind Scotland wind farm can reduce carbon emissions by 63,000 tons per year. According to EDF (Environmental Defense Fund), if we calculate the approximate cost of damages caused by carbon pollution, that would be $50 per ton of carbon. That means Equinor’s wind farm can help society to save more than 3 million dollars per year on carbon damage.

Although fossil fuels are predicted to stay exists until a few decades later, the demand for wind-based energy is rapidly rising. Equinor itself has gained approximately 10% market growth since the construction of its pilot farm.

7. Less Impact on the Environment

This innovation does not require complex construction, land exploitation, and even chemicals. That means we can avoid the environmental damage we used to make from other kinds of energy generators.

No matter how good Hywind may sound, there must be some concerns we must be aware of regarding this innovative floater. Hopefully, these are not holding us back in transitioning to cleaner energy. Instead, these can help us prepare and anticipate.

Here are the possible disadvantages of floating wind farm:

An offshore wind turbine generally costs about twice more than a land-based windmill. This is the major reason why the offshore wind farm has not been very popular. However, Equinor has successfully reduced the cost of Hywind by 40-70% compared to similar offshore wind projects during 2012-2017. The company believes that by 2025, Hywind would have been cost-competitive as a sustainable energy supply in the market.

Birds and bats often fly across the ocean. It would be dangerous if they pass through within the rotor radius. Up until now, there is not yet any data or even research regarding this concern. Let alone an anticipation plan to prevent the incident.

The rotor spin might be noisy and the giant structure of wind tower might interfere with the serene view of the ocean. Such conditions would be major disadvantages for tourism activity. That is why Equinor suggests locating the farm quite far from the beach to reduce the effect. However, the noise might still affect the marine life around the wind farm.

Conventional onshore windmills are still considered the most cost-effective energy generator technology. However, an offshore wind farm has a strong potential to excel in the industry of sustainable energy. What we need is just more research and effort to develop the technology.

More About Equinor and Masdar

Equinor is the new name of Statoil, a Norwegian state-owned company in the oil and gas industry established in 2007. The name was changed in May 2018 as the company decided to aim for clean energy alternatives. Although they still have many fossil-fuel energy industries operating in 30 countries, Equinor has also developed much in its transition process to sustainable energy innovation. In 2014, the company ranked fourth place as the most sustainable corporations in the world.

On the other hand, Masdar or Abu Dhabi Future Energy Company has been focusing on renewable energy and clean-tech industry since its establishment in 2006. Owned by the government of Abu Dhabi, Masdar has developed, invested, and delivered a countless amount of clean energy all over the world. Masdar’s biggest innovation is the sophisticated Masdar City, the most environmentally sustainable city in the world.

Hywind Scotland is a project developed by an excellent collaboration between Equinor and Masdar. Equnior holds 75% of the investment, while Masdar holds the remaining 25%. With Equinor’s great experience in offshore construction and Masdar’s expertise in sustainable energy technology, we can see how Hywind can be the leading company in floating offshore wind farm business.