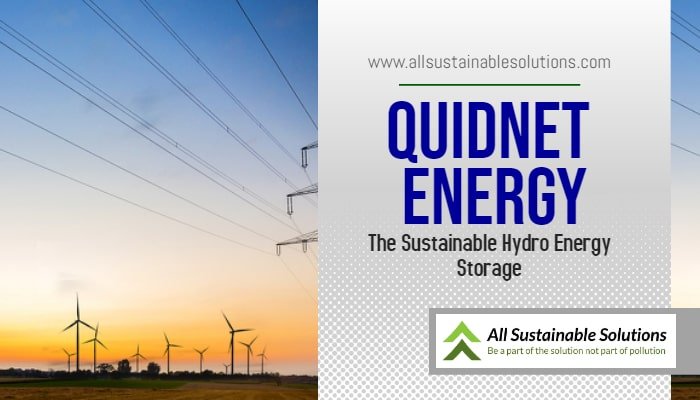 Quidnet Energy – Climate change is real, and the effects are affecting humans negatively. As a result, we all have to work together to strategize on how we can reduce the causes of climate change. Humans have played a role in global warming, which is resulting in climate change. This is through the production of carbon from greenhouses and the burning of fossil fuels. As such, there is a need to develop new ways of doing things to reduce the amount of carbon in the environment.

One primary way is by use of renewable sources of energy, which allows decarbonization of the electricity grid—generation of carbon-free electricity. A lot of companies are putting effort into developing new technologies on how they can produce power through renewable sources through solar, water, and wind.

However, grid decarbonization is a challenging process. This is because the most effective way is through renewable energy, which faces storage inadequacy resulting in massive power swings causing power blackouts. This article talks about Quidnet energy, which is a company that has developed a new technology in renewable power generation that can produce a large amount of electricity with less expense.

We discuss the project solution, a description of how the solution work, costs involved in the implementation, the pros and cons, and the company details.

What is Quidnet Energy?

Quidnet Energy is a technology-driven energy company whose aims and goals are to power a carbon-free electric grid. Its focus is to develop a new way of energy storage by storing water underground to deliver energy—the underground pumped hydro concept. They utilize abandoned oil and gas wells for their projects in storing pressurized water in rocks, which can later be released to produce electricity. The company was started in 2012 by Aaron Mandell and his co-founder Howard Schmist and by 2013 and 2014, they had started working in its first demonstration project in Texas.

According to Mandell, their goal is to allow renewables like solar and wind to penetrate the power market at much larger percentages than there is today. For a demonstration, they used a natural gas well that was 2,800 feet deep that could hold 50k gallons of water. They pumped water into the well, and the results showed that after 12 hours, they could generate six hours of electricity.

The company aims to reduce costs by large margins. According to Aaron Mandell, battery technologies that are widely used globally range about $400-$500 per kilowatt-hour, and they aim to range under $50 per kilowatt-hour for the entire system. You may wonder what makes it cheaper. Well, their production cost is low as equipment needed to drill holes to store water are existing, and they also utilize the abandoned oil and gas wells, which are available in significant numbers. With such lower rates, it would be relatively inexpensive to use renewable energy sources globally.

The solution is similar to the widely used energy storage known as “pumped hydro”. The pumped hydro is utilized when electricity prices fluctuate. When the prices are low, water is pumped from a dam to an upstream reservoir, and when the electricity prices go up, water is drained back to run through a turbine generating power. However, with Quidnet energy technology, the water is stored in wells, compressing into the rocks to create pressure such that, when released, water runs up the well and goes through a turbine to generate power.

How Does It Work?

Step one is to locate oil and gas wells. The wells are used to store energy. The company uses oil and gas wells for two reasons. One is because it is to reduce exploitation risk. The wells have holes drilled previously for oil and gas production, and so the Quidnet Energy Company already knows how the geology looks like making it easier for them to get started with the energy production process without the cost of drilling, saving them startup money.

The next reason is to take advantage of the available infrastructure. For example, for the demonstration plant in Texas, they did not have to drill a well as there was an existing 2,000ft gas well that served them well. It enabled a quick start as all they needed to do was connect the generator and the turbine.

The second step is pumping water into the well to apply pressure to the body of rocks, storing energy in the compression of the rock.

When energy is needed, the pressure is released, pushing water back up and through a turbine generating electricity.

The entire system operates with closed-loop water systems that are designed to prevent evaporative loss for conservation and regularly treated with disinfectants.

According to Mandell, co-founder of Quidnet, the cost of building a well depends on the depth. For a project, the price is $50 per kilowatt-hour of energy. The price will include the well, turbine generator, planning, and securing permits. However, the cost of drilling to determine the proper underground is not included.

It is terrain independent
With sub-surfaced pumped hydro, the water is stored in wells, which means there is no need for dams, lakes, mountains, or pre-existing underground caverns. Unlike the widely used pumped hydro method, the Quidnet energy technology is terrain independent, which makes it suitable to be used in every location as there are no terrain requirements.  This advantage sets it apart and enables the company to generate renewable energy in any area of their or client’s choice.

Cost-effective
Quidnet uses oil and gas wells that are readily available around the world. This gives them an advantage as they do not undergo drilling costs, which could add the production cost. The equipment required in the process is existing, lowering the price more.

Reliable
The equipment used in the production process is provided and serviced by mature suppliers from well-established industries. This ensures standard and quality services making it stable.

Modular
The technology has 5-20 MW modular configurations for precise and flexible deployment onto the grid.

Cons
One of the disadvantages is water loss in the wells, which could affect power output.

The Company plans to build and operate energy storage projects for industrial companies, utilities, and power plant owners. They hope to develop their own wells in locations that have high electricity demand. For each project, they will operate up to 20 wells, each measuring between 100-1500 feet deep. Each well should be capable of storing 35-megawatt hours of energy.

Quidnet Energy Company relies on data that exist around the world to find abandoned oil and gas wells locations to build power plants to increase the production of renewable energy. However, as they scale-up, there is a plan to drill their own wells. What is required is to find impermeable rock formation, which is easy to find, drill down to the required depth, and then open up the rock using hydraulic stimulation.

One of their worries, in the beginning, was water losses in the reservoirs. They anticipated 1% water loss per day but recorded that 1% per week. However, this remains a challenge to their solution. As long as the reservoirs do not leak, and they can be able to control the outflow, and if fast enough, their technology would work efficiently.

Quidnet Energy Company is one of the companies that have decided to invest their money in technology that helps reduce climate change to save the coming generations. Their concept and efforts have attracted support from investors such as Bill Gates through Breakthrough Energy Ventures (BEV) fund, as well as foundations such as Will and Jada Smith Foundation and Sorenson Impact Foundation, among others. Their goal is to generate large-scale carbon-free electricity. Their technology stores water underground for power production to reduce emissions of harmful gases such as carbon dioxide to the environment.

The electricity generated is cheaper than the alternative lithium-ion batteries. Quidnet is allowing renewable resources to find their place in the market while maintaining grid stability. With such efforts from companies, we get a clean and safe environment protecting our surroundings.

Such potential companies are what the world needs in every sector of the economy to help in the reduction of harmful elements in the atmosphere so that we can conserve the environment for a better, healthy, and growing prosperity for every living thing.