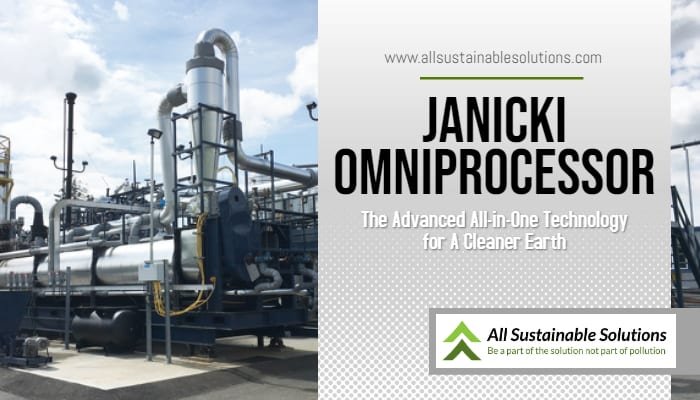 Although it doesn’t seem to be a big problem in developed countries, sanitation is still a major concern in many poor countries. The need for effective bio-waste management is crucial, judging for the high number of hygiene-related diseases. Janicki OmniProcessor turned out to be a wonderful solution for this issue. Furthermore, innovation goes beyond expectations. Not only the technology can provide effective sanitation for the community, but it also turns the fecal sludge into electricity and drinking water.

What is Janicki Omni Processor

The term “OmniProcessor” came from a staff of “Water, Sanitation, & Hygiene Program” by the famous Bill & Melinda Gates Foundation. It refers to a technology that can process many kinds of biowaste, especially human fecal sludge, to be safely released to the environment. The machine is also expected to produce something with beneficial value.

Janicki OmniProcessor becomes the first omniprocessor to fully operate. Not only the innovation is proven effective to remove pathogens from the fecal sludge, but it can also process to release the sewage to the environment safely. Moreover, the system also produces drinking water and electricity.

Janicki OmniProcessor consists of three kinds of machines. The main one is Solid Fuel Combustion, which deals with bio sewage treatment, resulting in exhaust heat and water/steam. Meanwhile, the two other machines will treat these byproducts and turn them into valuable goods.

The process starts with biowaste coming into the dryer machine. The heat will evaporate all the moisture, resulting in dry solid waste to use as fuel for combustion. The combustion turns these biosolids into ashes. This process also kills all the disease-spreading pathogens.

This procedure results in three types of byproducts; the dry ash, water from the drying activity, and exhaust fire. Since there are no chemicals used in the system, we can these things can be released to the environment safe with the right treatment.

However, innovation does not stop there. There are Steam Power Generator and Water Treatment to utilize the byproducts for more beneficial results.

The heat from the combustion would heat the water and produce steam. A steam engine will then continue the cycle and trigger a generator to produce electricity. It is a similar principle as used in any other steam generator.

Electricity produced at this episode is more than enough to run the Janicki OmniProcessor itself. It even still leaves out surplus energy, which can be distributed and utilized by the community.

The system can reuse heat from the steam engine to dry the biowaste. It is then condensed back as water to be used again in the steam-generating process. And that is how the cycle keeps going on.

Now let’s go back a little bit on when the biowaste was in a dryer machine. The moisture stripped away from the sludge would form sludge steam, which is then filtered, condensed, and distilled to be clean water. The water would be clean enough to drink. But, it can also work for other needs.

In simple terms, this is how Janicki OmniProcessor works:

The dryer turns wet biosolids into dry biosolids, which then acts as dried fuel for the combustion. The heat will generate steam, which will generate electricity. Heat and water produced by the system can be transferred, reused, or utilized for many purposes. And here are the valuable byproducts from this system:

All of those byproducts can bring many benefits we can use, either it is to sustain the machine itself or for other use. Even if we don’t want to use these byproducts, we can release them back to the environment without causing any harm.

More About the Machine Janicki Omniprocessor

One unit of Janicki OmniProcessor can process up to 60 metric tons of wet biosolids per day, which is equal to 15 metric tons of dry ones. These can be processed into 100-200 kW of electricity, 22,000 liters of water, 2-3 tons of ashes, and 30-60 GJ of heat per day. The machine’s carbon footprints are approximately 567 square meters.

It is also important to note that Janicki OmniProcessor works in a negative vacuum situation. That means no air coming out of the system. Hence, you won’t be smelling any odors around the operating machine. However, there might still be odors while the sludge is transporting from you to the plant.

Janicki OmniProcessor goes beyond expectations. Not only because it can produce electricity and clean water from human’s feces, but also because the machine can also process any kinds of bio-waste. For example, here are some other things that can go into this omniprocessor:

Peter Janicki was an expert in the manufacturing and machinery industries. He is the CEO of Janicki Industries, a company specializing in large-scale machinery. In 2011, Janicki brought his team to accept a challenge from Bill & Melinda Gates Foundation in the program called Reinvent the Toilet.

With dedication, the team successfully invented Janicki OmniProcessor in 2013, which then started its operation in 2014. The year marks the foundation of Janicki Bioenergy. Later in 2018, the company rebranded as Sedron Technology as they see the new name fits the company’s goal better.

Sedron Technology is focusing on developing technology with economical value without ignoring responsibilities to the environment. Besides Janicki OmniProcessor, the company has also invented many innovations in waste and water treatment systems.

In 2015, the famous billionaire, Bill Gates, went viral on the internet for drinking water out of a sewage treatment system. That was Janicki OmniProcessor’s pilot operation. The project started in 2014 in Dakar, Senegal.

Before this project took place, Senegal had a serious issue of an epidemic caused by pathogen-spreading, due to terrible sanitation. People were too poor to manage their fecal sludge properly. Hence, they just leave them on the open soil or throw it into water bodies. This practice was continuously contaminating the land and water around their neighborhood.

Janicki OmniProcessor solved their bio-waste management issue, resulting in a drastic decrease of pathogen-induced illness. Furthermore, this innovation also gives out some bonus benefits; clean water and power supply. Since resources are easily available and illness number drops, the productivity of people in Senegal was increasing as well. In the bigger picture, Senegal also scored an impressive improvement in economic growth.

Up until today, this Janicki OmniProcessor is still operating on a day-to-day basis, processing fecal sludge from up to 100,000 people in the community. Sedron Technology plans to establish more machines in other developing countries in Asia and Africa.

When the project started, only the team from Sedron Technology can operate the machine. But after a series of training, local Senegalese are operating the machine themselves now.

Janicki OmniProcessor sounds like a promising innovation for the future. The technology brings many proven advantages with huge potential for improvement. Here are some benefits to get from this comprehensive machine:

Being a new technology, Janicki OmniProcessor still has many things to improve. Here are some disadvantages this innovation may carry for now:

The capital cost is approximately $1.5 million to establish one plant. This number is still too big for people in third-world countries.

Although there would be no smell coming out of the machine, there would still be some awful smell of fecal sludge when they are coming into the system. This would cause major discomfort for people around the machine, especially the workers.

The idea of drinking water from fecal sludge is still disgusting for many people. The quality of water produced by Janicki OmniProcessor has surpassed many bottled drinking on the market. But the psychological issue needs more than logical data to get settled.

Janicki OmniProcessor provides answers to many problems, especially those commonly happen in the third-world countries. Even though there are still many things that require developing. However, Sedron Technology is optimist that Janicki OmniProcessor would perform a lot better in the future.